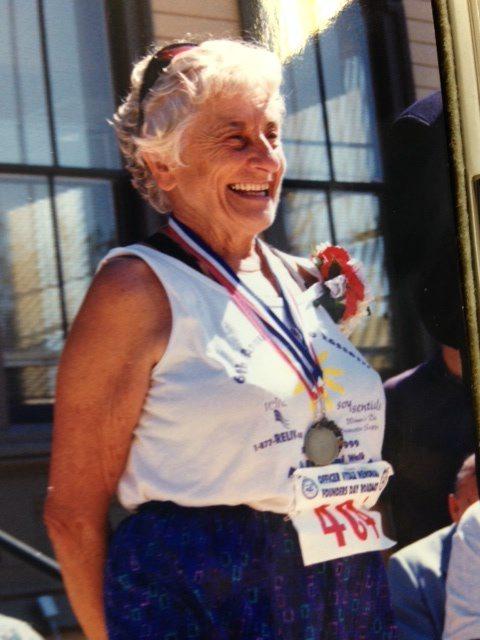 When I read the headline from The Boston Globe's Obituaries page, "Louise Rossetti, 93, of Saugus: Inspirational Runner," I automatically knew I had found the next feature in the second installment of my Inspired Running series. There's just something incredibly impressive and inspirational about a 93-year-old runner. The obituary featured a 5x7 picture of a smiling, spry Louise standing next to a collection of scrapbooks full of the results from all the races she'd ever run the bibs she'd worn, and even trophies she'd won over the years.

Louise's running career didn't begin like the typical runner who maybe had a love and passion for running that began in her youth. She began running in 1971 at the age of 50 years old. She caught the bug while taking a class at her local YMCA, however, she quickly learned that the inside track and running in circles was not her cup of tea, so she ventured outside where there was no stopping her. That same year, in May of 1971, she ran her first five mile race where she tied for last with a time of 53 minutes. But place didn't matter because as the Boston Globe reported, "she became an institution in Boston running circles, someone who was more inspirational at the back of the pack than those breaking the finish line tape."

By 1981, her runs became more frequent and more than just a fun thing to do. They became an outlet and what seemed to be a type of therapy for Louise while she was coping with the loss of her daughter, Suzanne, who had been tragically murdered by two men outside of a convenience store. She competed even more after her husband passed away in 1993.

Some accomplishments that followed for Louise:

On June 18, 2014, the 21st annual Louise Rossetti Women's 5K Race took place, and although Louise was not able to run, she was there to support and congratulate the runners crossing the finish line.

Ten days later, Louise turned 93 and the day after, June 30th, Louise passed away. She left a legacy for all who knew her and for those who didn't. Her smile will surely be missed — both on the race track and in life in general, but her spirit lives on in every life she's ever touched and along every mile she's ever run.